Warren G is a West Coast rapper and hip-hop producer for Long Beach, California. In 1990, he formed the group 213, named after the Long Beach area code, with his friends Nate Dogg and Snoop Dogg. While practicing with 213 and working a full-time job, the young Warren used all his free time on creating his own sound and aspired to make it big. The trio dissolved when two of its members signed with Death Row Records. Although Warren G had the option of joining Death Row, he preferred, from the very to focus primarily on his solo career from the very beginning (adapted from Wikipedia).

16 in the clip, and one in the hole.
Nate Dogg is about to make some bodies turn cold.
Now they dropping and yelling.
It’s a tad bit late.
Nate Dogg and Warren G had to regulate.

What is a collocation?

If you want to grow your vocabulary and learn more words quickly, then start studying collocations instead of one word at a time. What is a collocation? According to the Oxford Advanced Learner’s Dictionary, it is:

a combination of words in a language that happens very often and more frequently than chance.

For example, think of the word traffic. 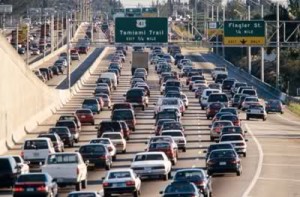 There are several combinations that are very common in English:

Collocations with ‘On’ in Warren G’s “Regulate”

On is a common preposition of time and place, but it is also used in many everyday expressions and phrases. Here are some collocations with on that are in Warren G and Nate Dogg’s classic “Regulate.”